Legacy Veterinary Clinic recommends castration of male dogs at the age of 4-7 months. Male dogs being used as stud dogs are also recommended to be neutered after a certain age. There are several health benefits to neutering. One of the most important concerns is the prostate gland, which under the influence of testosterone will gradually enlarge. The enlarged prostate can cause difficulty urinating or constipation. The prostate under the influence of testosterone is predisposed to infection which is almost impossible to clear up without neutering and aggressive antibiotics.

Story: This 7 lb toy breed dog was referred to Legacy Veterinary Clinic from one of our referring practices for ultrasonic evaluation of a mass on the perineal area. 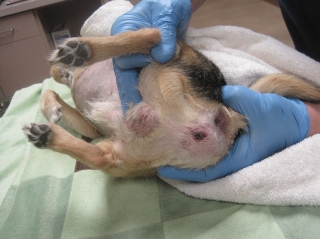 Ultrasonic examination showed that severe prostatic enlargement has caused difficulty urinating as well as the enormous pressure has caused the prostate to herniate into the perineal area. The apparent mass is nothing but the severely enlarged and herniated prostate. 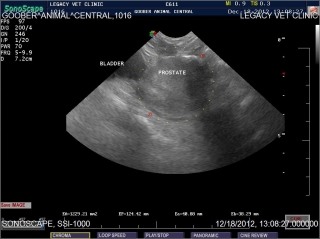 Neutering causes the prostate to shrink, thus preventing both prostatitis as well as the uncomfortable benign enlargement that occurs with aging. If the prostate has not already become cancerous, it will shrink in size after neutering.